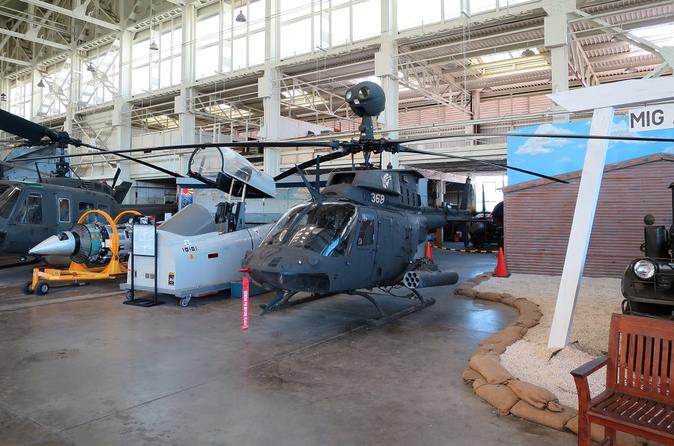 Visit the Arizona Memorial, The USS Bowfin Submarine, The USS Missouri, and The Pacific Aviation Museum in this private combo tour of Pearl Harbor.

The Arizona Memorial is the final resting place of 1,177 Sailors and Marines killed during the attack at Pearl Harbor.  The surprise attack by Japanese forces on December 7, 1941 secured the United States involvement in World War II.  The memorial is a stark reminder of the sacrifices made by the men and women of our armed forces to protect our freedom and our way of life.

The USS Bowfin Submarine was commissioned in 1942 and served 9 patrols in the Pacific before being decommissioned, transferred and transformed into a museum in 1979.   The USS Bowfin is known as the "Pearl Harbor Avenger," and is one of only 15 remaining submarines from WWII.   The Bowfin sunk 44 enemy ships during WWII including a bus.   You will be able to walk through the submarine and see what life was like for 80 crew members and their officers.

The "Mighty Mo" was the last Iowa-class battleship but by the United States, launched in 1944.  She was named in honor of the state of Missouri and was the site of the Japanese empire's surrender in Tokyo Bay on September 2nd, 1945.  The Missouri also served in both the Korean War in 1950- 1955 and the Gulf War in 1991.

The Pacific Aviation Museum sits on the historic Ford Island.  These World War II hangars still bear the scars of our nation's first aviation battlefield and rank as the #8 aviation attraction in the nation.  There are two hangers with planes as well as the helicopters that were used in WWII, Korea, Vietnam, Panama, Afghanistan, and Iraq.  Our guides will tell stories of these aircrafts and how they were implemented in war.

Visit the Arizona Memorial, The USS Bowfin Submarine, The USS Missouri, and The Pacific Aviation Museum in this private combo tour of Pearl Harbor.