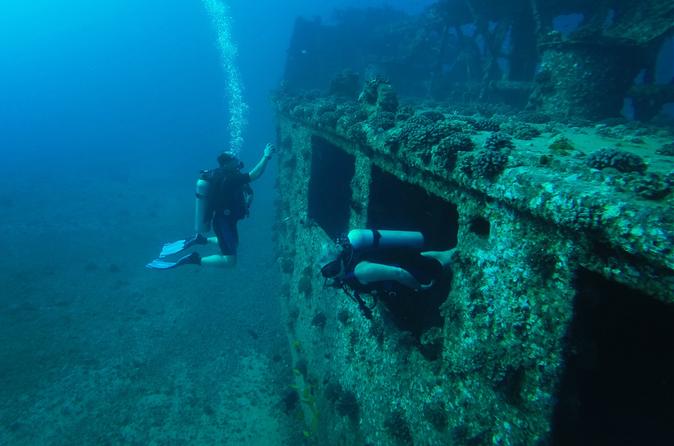 Sea Tiger - 80 to 130ft/25-40m**
This is an advanced dive as it claims the title for deepest recreational wreck on the island. Originally a fishing vessel, this ship was sank in 1996 by a subamarine company for its tours. However, shortly after the company closed and the site quickly became a must dive for locals and visitors. Large schools of pyramid butterflyfish, massive sea turtles, and white tip sharks frequent this wreck.


YO 257/San Pedro - 60 to 100ft/18-30m**
Enjoy this 2-for-1 special! Two unique shipwrecks sit only about 100ft/30m apart. When the conditions are just right, you can see the other wreck off in the distance. Great corals share the decks with large numbers of fish and several species of eels. These sites were also sunk by a submarine company, and they still frequent the area. If your lucky, you will see the long white sub pass around and between the two wrecks. Don't get too close!


Turtle Canyon -15 to 30ft/5-10m**
Its in the name! As many as a dozen green sea turtles can been seen together here. Take a knee and watch one of the busiest turtle cleaning stations on the island. Several at a time gather to have their shells cleaned by tangs, wrasses and other fish. The turtles are used to divers, so getting a photo with one is usually easy. Don't touch though, these guys are protected by law.

Horseshoe Reef/Kewalo Pipe - 40 to 65 ft/12 - 20m**
Another south side double whammy! Horseshoe reef gets its name from its shape. Here you can find several species of eels, pincushion starfish, and antler coral. Swim 50ft/15m to Kewalo pipe. Keep your eyes peeled for spotted eagle rays off in the distance, and follow along this drainage pipe covered in coral and little critters galore.